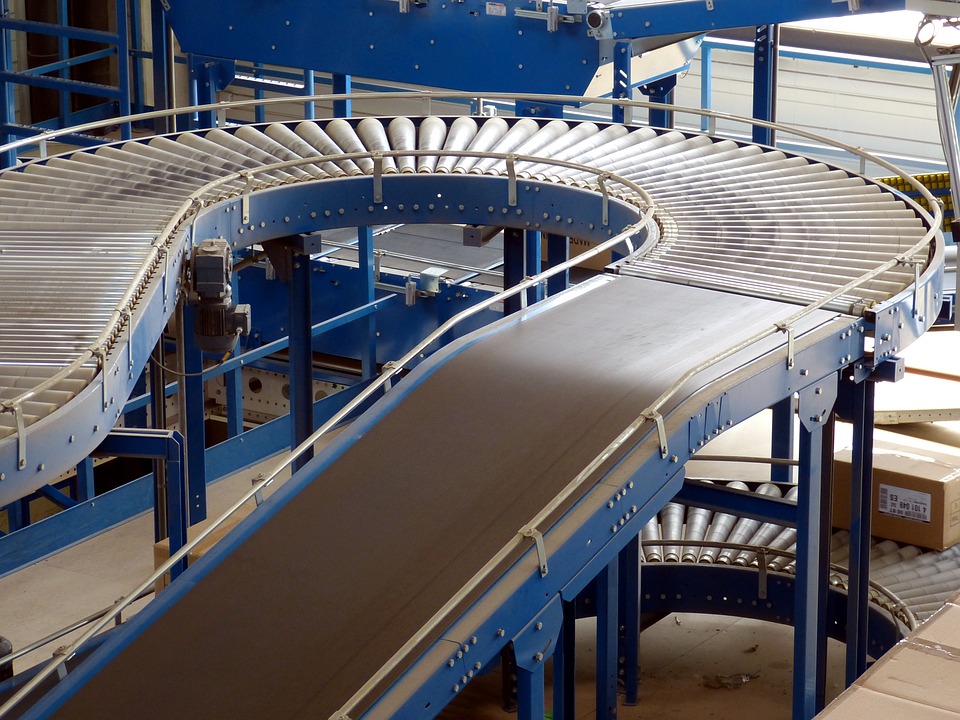 Conveyors are a mechanical piece of equipment that enables the movement of materials from one place to another. There is a wide range of different applications for conveyors including; the motor industry, construction, food industry, electronics, farming, scrap, pharmaceuticals,  supermarkets and airports. They increase the rate of production and have revolutionised manufacturing.

There are many different types of conveyors including; gravity, belt, bucket, pneumatic, vibrating, chain, and vertical conveyors. Conveyors move either mechanically or by using the force of gravity.  Industrial conveyors either transport boxes and heavy items along the factory floor or transport bulk items such as grains, salt, coal etc.

Conveyor belts have been in operation since the late 18th century. Modern conveyor belts are similar in construction to the leather and wooden conveyors of the past. The first conveyors were very primitive in design and used to transport coal, ores and other metals.  Henry Ford made conveyor belts famous through the product of the Model T Cars in 1913.

Historians estimate the first conveyor belts were invented at the end of the 18th century.  They had wooden frames and leather belt and the basis of modern conveyor belts we see today.  Steam was the main source of power for conveyor belts in the beginning. The first example of combining conveyors and steam power was the production of biscuits for sailors.

The Onset of the Industrial Revolution saw great advancements in conveyor technology.  Thus enabling the transportation of bulk materials such as coal. The first steel conveyor system was developed in Sweden. In 1905 Richard Sutcliffe patented the first conveyor system used in coal mines.

Henry Ford drew the world’s attention to conveyor systems in 1913 through the production of the Model T Cars.  Production was faster and more efficient because workers did not have to keep moving their tools to each car. Therefore reducing the production time to 93 minutes.  By 1919 conveyors were part of all production lines in the automotive industry.

Modern conveyor systems are very similar to the very first conveyors but the technology within them is constantly developing. The demand for conveyors is greater than ever due to the surge in online sales.  Amazon’s fulfilment centre in Robertsville has 14 miles of conveyor belts to help sort and package items for shipment. The video below demonstrates how their vast system works.

The modern world is the perfect environment for the development of conveyors as we all rely on goods delivered to our door.  As the population increases there is a greater demand for quicker and more efficient ways to ensure people and companies get the goods they ordered on time and in good condition.

If you would like to find out more about conveyors contact us and we would be happy to discuss the options we have available.