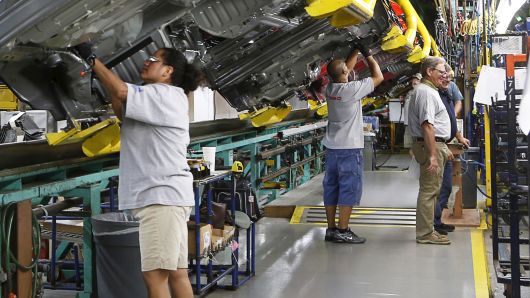 Ford’s aim was to, ‘put the world on wheels’, (Source: Ford UK) he achieved his goal by mass-producing affordable simply designed cars.  Conveyors made mass production possible because cars moved to the engineers allowing many cars to be constructed at once.  Before production lines, cars were made one at a time which was extremely expensive and slow.

Modern car production lines are very similar to Ford’s original blueprint.  Robots positioned in various points along the line increase the accuracy and speed cars are built.  All car companies use production lines inspired by Henry Ford’s original design. In 2016 over 70 million cars were produced globally.  The car industry is a huge business which will continue to thrive as we move towards electric cars.

Conveyors revolutionised car production because it increased efficiency and the the ability to work on many cars at a time.  Cars were painstakingnly built one at a time before production lines making it time consuming and expensive. Building cars this way was a waste of manpower because engineers had to take it in turns to work on each car.  Production lines make it possible to work on diffiferent parts of many cars at the same time so noone is standing around doing nothing. 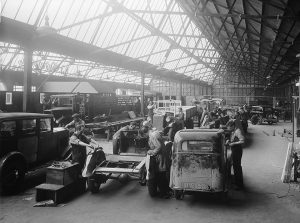 The principle behind production lines is very simple and is applicable to many industries. Conveyors have a number of work stations along them where the cars stop to have work done to them.  It is no surprise car companies all over the world have adopted Henry Ford’s assembly lines to manufacture cars. Ford is still one of the leading manufacturers of passenger cars with the Ford Focus being the most popular car in 2016.

The Car Industry And The Economy

Car manufacturers are not the only people who profit from the billion pound car industry. Suppliers, car dealers and marketing companies rely on revenue from car production. The size of the automoblie supply market world wide is 650 bn Euros.  Bosch is the largset supplier with 44 thousand employees. Millions of people rely on income generated by the car industry. (Source: statista.com)

The general public and many businesses rely on cars to go to work and fulfil their job roles.  Delivery drivers, carers, taxi drivers, medical staff and muic teachers are just a few of the people of the people who rely on cars to do their jobs.  According to thismoney.co.uk 1 in 6 UK jobs require a valid driving licence due to shift work, remote locations and poor public transport.  This applies to jobs that do not involve travelling about.

We all rely on transport to get us to work and to look after the people we care about.  If you would like to increase your company’s production by investing in conveyors contact us and we would be happy to offer advice.