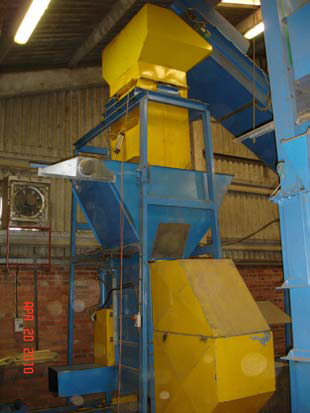 A second hand Baler, Feed Conveyor and Rotary Mixer that was originally designed for packing hay, straw or shavings is for sale.

The equipment includes; – An inclined chevron pattern belt Conveyor – A mass measuring Baler c/w hydraulic power unit – An in-line Rotary Mixer (see extra price below) The equipment will pack bales weighing between 15 and 25 kg depending on the density of the material. The baler produces a 600 long x 400 wide x 370 deep nominal bale at an approximate rate of 100 bales per hour. The Conveyor has a 900 mm wide chevron pattern belt and is 10,000 mm long. The equipment was originally installed in December 2003, has had very little use, is in excellent working order and can be seen operating in Yorkshire. The reason for the sale is that the client has changed their business strategy.

Price for the inclined belt conveyor and the mass measuring Baler – £ 45,000